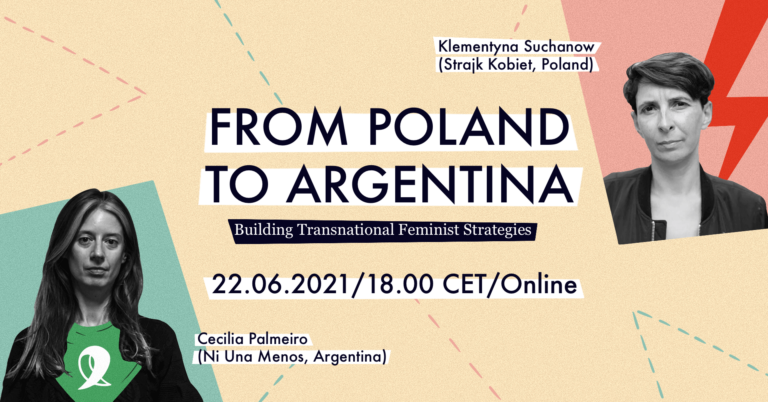 Guests:
Klementyna Suchanow
an activist in Strajk Kobiet, Poland / an author of “This is War” (To jest wojna. Kobiety, fundamentaliści i nowe średniowiecze)
Cecilia Palmeiro
an activist in Ni Una Menos, Argentina / a professor at NYU, Buenos Aires

On December 30, 2020, the Senate in Buenos Aires voted for a legal and free abortion, a topic that has become one of the crucial socio-political discussions in Argentina in last fifteen years. On October 22, 2020, the illegally elected and politically controlled Constitutional Court in Poland ruled about the unconstitutionality of the last three conditions, which, in theory, still allowed abortion, namely in cases of rape, threats to the health of a pregnant person, and in the case of fetal damage. Despite mass protests of the Polish feminist movement, three months later on 27 January 2021 the contested decision has entered into legal force, which in fact means de facto a complete ban on abortion in Poland.

These two examples, while very different in their socio-political context, raise a question of the need for international feminist structures that would connect local practices across different geographies, histories, and manifold feminist epistemologies. This is particularly urgent as investigations into anti-gender international coalitions uncovered, and which have mobilized internationally around projects such as bans on legal abortion, anti-LGBTQ + campaigns, or the closure of academic departments working on gender equality issues.

This discussion, centered around transnational feminist solidarity practice and exchange, will bring all these urgent topics together, building up on urgent questions about possible feminist mobilization strategies against the ultraconservative international movements.

The event has been supported by Rosa-Luxemburg-Stiftung e.V., zastoupení v České republice