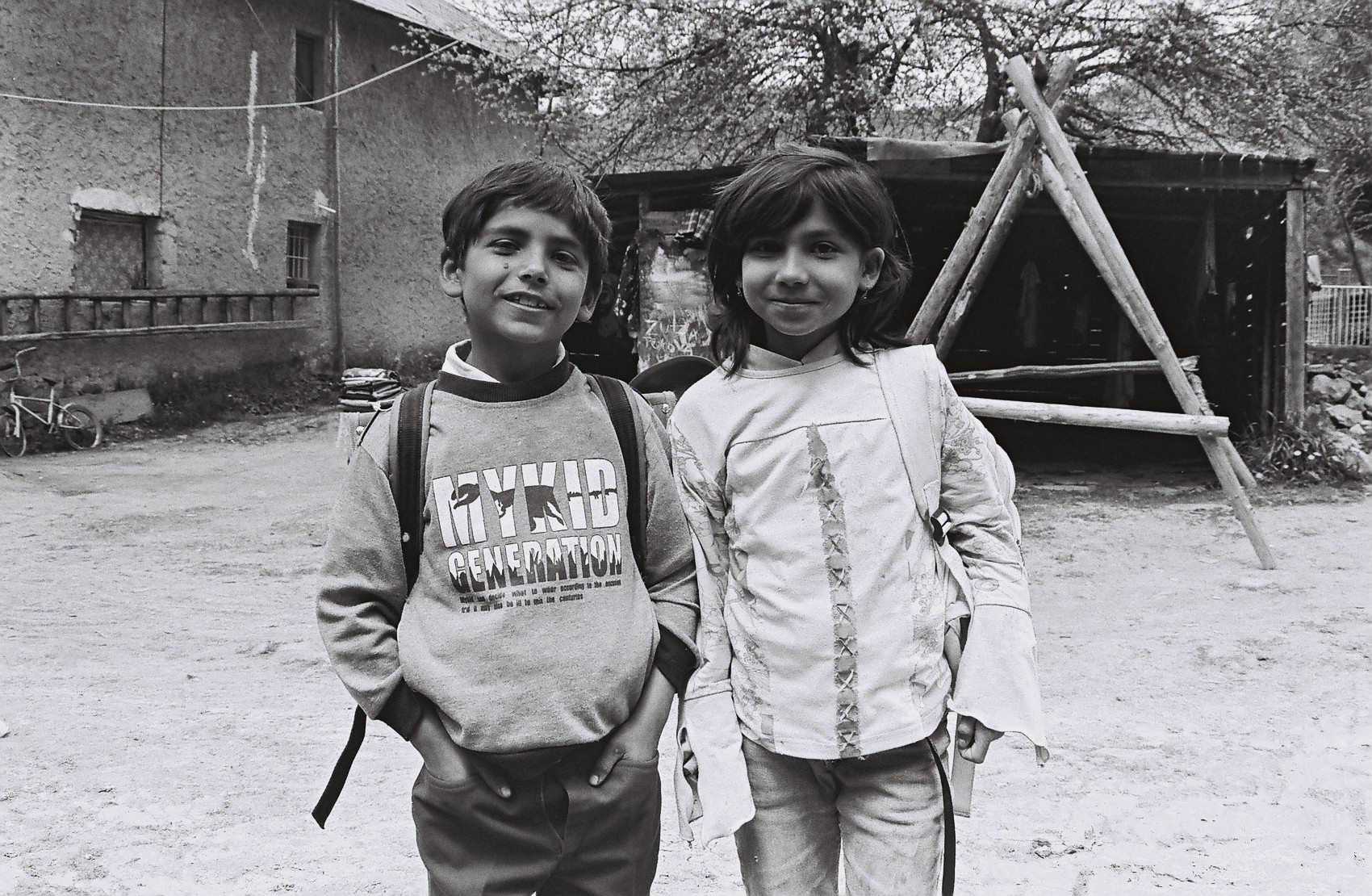 Social distancing, isolation. The frequently mentioned terms of the pandemic situation gain an even more bitter sense when we connect them to the slovakian Roma, who have been living in socially excluded settlements on the peripheries of numerous Slovakian towns for years. Let’s take a closer look at how their already burning situation got even worse during the past few months.

According to resources available around 7000 people out of the overall 250 thousand settlement inhabitants still remain quarantined in their villages. 200 of these enclaves count as the poorest. As one of the prominent experts on the specifics connected with the general health of the Romani population, anthropologist Andrej Belák suggests, the overall number of Romani villages that are imminently endangered by the pandemic is surely less than 600. According to the data coming directly from the field, the government is not fully in charge of the situation and approaches the arising issues unsystematically and on an ad hoc basis. As Andrej Belák says, the coronavirus pandemics presents by far the greatest risk to elderly and chronically ill Romani people themselves. Unfortunately it does not come as a surprise, that part of the Slovakian majority still tends to see them as a source and main spreaders of the infection.

This is closely connected with the fact, that only shortly after the pandemic started, many Romani families that have previously work-travelled abroad (especially to the UK and other Western European countries), started returning to their original homes in Slovakia. These families have been the main target of the pilot testing designed to find out wheather individual villages may be a distinct primary source of infection brought from another country. The question nevertheless is not, if the people living in these villages are Roma; the main reason of concern was fast spread of the virus in seggregated Roma enclaves due to the local living conditions therein. By the end of April experts from the Healthy regions (Zdravé regiony) organisation, which is a State-budget administration of the Slovakian Ministry of Health, participated in the testing of returnees in over 250 villages, out of which infection has been proved in 23 cases with only three of these villages having a larger number of infected patients. Although the Healthy regions, who work as a complementory support of the public health, are – insofar as it is able – trying to spread awareness about prevention, there is a real chance that the current situation is only a tip of the iceberg.

The state has commited to quarantine only those communities, where the number of infected population exceeds 10 %. That is not the known case of the villages, or more precisely, these kind of data are still missing. Anyhow, due to dissimilar intersocial organization within the settlements, that puts the extended family model into its core, the efforts of ordering areal quarantines are not without a reasonable ground. That is, apart from the family communities-based structure the villages also have a different infrostructure with high population density or often even missing sanitary background.

With the year 1989 and transition to market economy the former Czechoslovakian state ceased to support its (sort of paternalist) service provided for the disadvantaged social groups and the service has fragmented among individual nongovernmental, nonprofit organizations. The financial responsibility was transferred to the European funds and the health care became individualized. The regions have lost their state-installed experts who took care of issues such as health prevention or e.g. water-sources control. The individual responsibility for one’s own health continues to be a privilege of only a part of the society – the rest has to do with lack of information and/ or resources.

Thus, according to Andrej Belák, preventing the spread of infection into and within the settlements presents a serious riddle. As to Roma themselves, they are naturally most concerned about the insecurity of what will happen to them in the prevailing situation. On one hand, the arising questions concern basic logistic issues, such as how to get grocery or medicine, how to inspect and self-inspect the villagers, on the other hand, how to effectively spread awareness among the Roma. Currently, the state of individual families is rather alarming, some are even close to starvation as the crisis broke out only a few days before the locals were about to receive their monthly benefit payments and it remained uncertain wheather they will be able to pick them up. What’s more, since the pandemia started, complaints are being heard from different regions, on rising tension between the majority and the Roma, who increasingly have to face situations such as somebody trying to cast them out of a local market etc.

The forms of necessary support continously remains in the hands of the nongovernmental organizations and has two major – health and humanitarian – aspects. At present point, the organizations put all their efforts in trying to manage themselves and distribute the specific roles among their members. It remains unreal to assume that they could manage to map the credible state of contagion in a short time period. As Belák suggests, quick areal preventative measures would have been more appropriate as the very first interventions in the case of the villages, such as installing sanitary checkpoints by the entrances and exits from the villages protecting the places from the pandemics through provision of missing information, disinfection, masks, etc.  At present time, 5 settlements in the area of Spiš and one in the area of Zemplín are in a so called collective quarantine, and there is 2400 members of army in the field. The overall capacity of the Slovakian army enables to deploy maximum of 8000 individuals, which would mean 20 fully guarded settlements put into areal quarantines. Many nongovernmental organisations and some of the media see the involement of the Slovakian army as unjustified and potentionally intimidating for the Roma. The fear of „soldiers“ reflects also in some of the hoaxes circulating between the Roma, which should not come as a surprise, when you consider their historical memory. More or less all of the former regimes were using some kind of intimidation or persecution form of the Roma by armed forces. Helicopters and drones flying above the settlements have all the reasons to make a threatening impression. Nevertheless, as both the experts and some of the local inhabitants say, the military is treating them with respect, sometimes even empathically. Mrs. Linda Pačanová comes from the village of Bystrany – one of the biggest Romani settlements in the area of Spišská Nová ves, where the epidemy has so far been dealt with successfully. „There were nine sick people in our village,“ she told us. „But all of them were strictly following the quarantine rules and presently we only have negatively tested people. In general, they have tested about 800 locals, the army came here every day,“ she said, and added, that the quarantine in Bystrany had in the end only lasted 16 days. „The soldiers guarded us, so that nobody could run off, but their behaviour was nice,“ Mrs. Pačanová says, and she can’t help but expressing her proudness: „They even mentioned us on the televison, when they said, that Bystrany are a good example for the entire Slovakia.“ Nevertheless, some of the quarantine precautions can arouse valid concerns about an unnecessary isolation of the infectioned ones together with the healthy.

Ill health conditions in the villages are not a new thing – as a matter of fact, the locals have been battling health issues since the political transformation in the 90s. Some of the infections such as tuberculosis or syphilis „tend to“ come back repeatedly, still there is a prevailing, rather obscurantist belief among the majority population, that the Roma are „naturally“ healthier and more resistent. As Andrej Belák explains, this kind of misinterpratation is easy to connect to the fact, that especially the local infants make a relatively „healthy“ impression despite of their living conditions. This can nevertheless be explained rather by the fact, that a child’s organism and immunity inflicted by continuous infections, simply saves energy for growth and development by milder manifestation of symptoms. For that reason, the consequences demonstrate only later in their adulthood, which is also the reason of the rather bleak statistic outcomes of the local life expectancy. Compared to the majority, it currently takes more than a decade off of the Roma village inhabitants. A sole proof of such discrepancy is however only reflected in academic studies and NGO researches, as the state refuses to monitor such discrepancies, although it is obliged to do so according to the European legislation, and although this issue represents an organic part of the Roma inclusion strategy.

The key player in the health situation of the Roma communities are the so called social determinants, which are traditionally the consequence of different social processes in the history of the ethnic. Numerous factors such as discrimination, racism or areal segregation reflect on the final outcome, including different ways of apathy or voluntary segregation by the disadvantaged groups involved. It unleashes a vicious circle of different factors impacting one another (e.g., bad health can be an obstacle of a work or study success etc.). This complexity of reasons and consequences is called „multidimensional social exclusion“.

Ergo, how to deal with the alarming situation of the socially exluded localities in the close future? Andrej Belák suggests community involvement in setting up of preventative and quarantine zonations might help. Individuals at highest risk of hospitalization could be protected from infection in so called green zones. In the red zones then, the already infected people would be supported through their healing process. Nonetheless it is now certain, that most of the exluded Roma are currently increasingly dependent on an outside help. As Belák emphasises, this does far not concern only passive recipients. Many Roma together with the NGOs and some of the municipalities already actively engage in self-help activities such as sewing and distribution of face masks or helping to organize the so-called social distancing.

Mrs. Linda Pačanová confirms these efforts: „We’ve got local patrols made of local Roma, our mayor František Žiga has been halping a lot as well,“ she states. „At the municipality, we’ve had mobile shops, where we could buy groceries or medicine, the wood used for heating was provided to us by our social workers.“

However, the basic and probably most essential recommendation at the time is to plan and realize all the activities in the villages with continuously taking into account all the detailed information on the local contexts, that can significantly vary in each of the localities. Even more importantly, the target group should be consequently invited to participate on all the measures taken, including the planning and the evaluation part. Participation „from the indside“ is both a guarantee of ethical legitimity and practical efectiveness of the interventions, as it brings not only closer access to the local context-connected information, but also increases the interest of Roma themselves.

Adéla Gálová is a journalist, translator and cultural event coordinator. She has translated books from Hungarian, worked for the One world documentary festival and managed Refufest – a multi-genre festival engaging the local refugees. Currently she is a part of the Hatefree Culture online platform team.